Fact check: No, electricity has not been a gift for Kashmiris till date

Alexander Estrada June 26, 2022 Payments Imbalance Comments Off on Fact check: No, electricity has not been a gift for Kashmiris till date 22 Views

Jammu and Kashmir has experienced several protests lately against the installation of smart electricity meters in households. In the middle of this, a social media post started making the rounds with a startling claim. According to some netizens, the people of Kashmir have been enjoying free electricity since independence. But now they will have to pay for it.

For example, a Facebook user posted a status in Hindi that read, “People in Kashmir will have to pay electricity bills! Yes, Kashmiris used to have free electricity from independence till date.

The same words were also shared by many on Twitter.

Archived versions of these messages can be viewed here.

A keyword search led us to a Newscast August 21, 2021. This was during a protest in Kashmir’s Baramulla district against ‘inflated’ electricity bills. This gave us an immediate clue that the allegation was false. 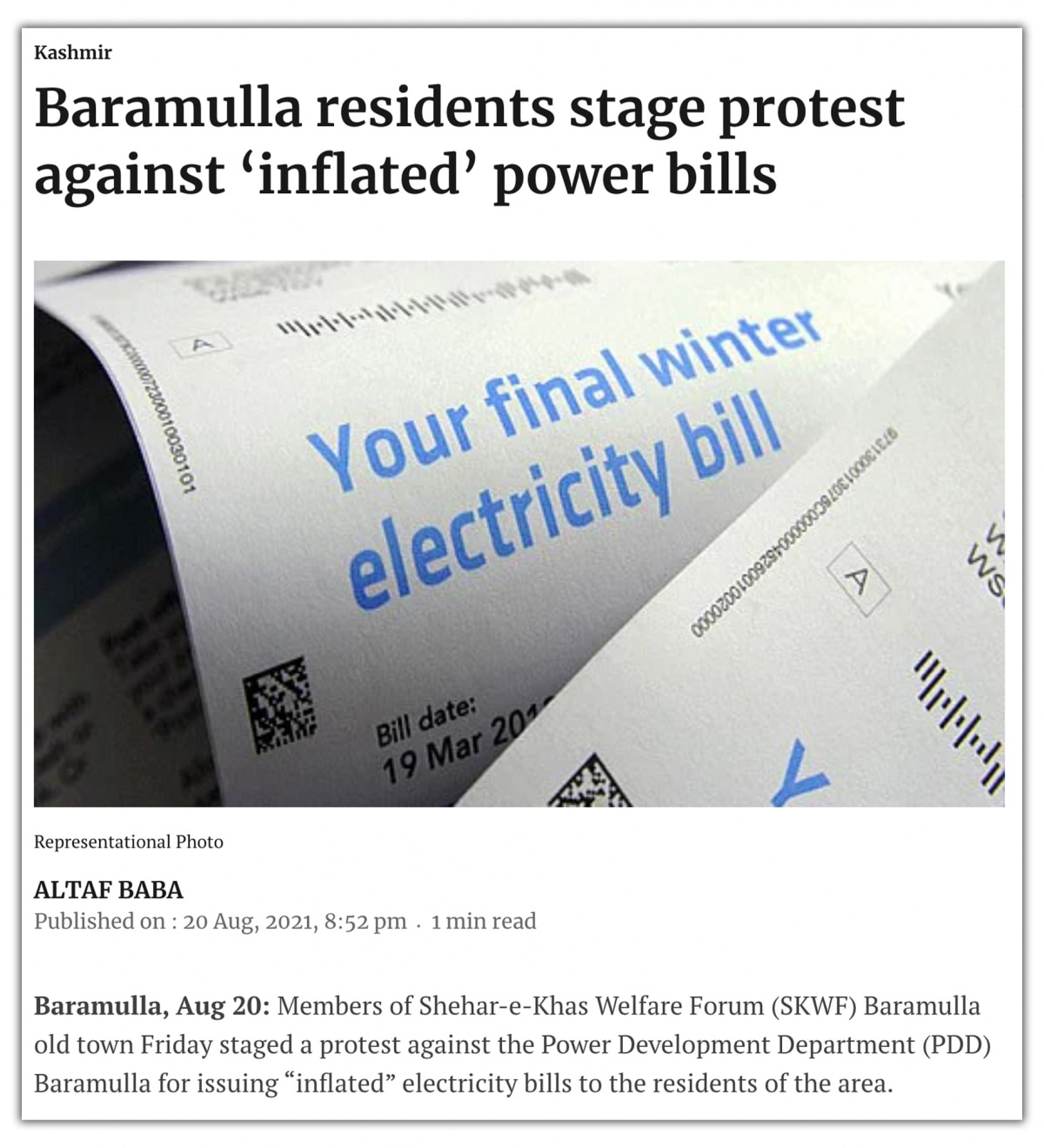 We visited the official website of Kashmir Power Distribution Company Limited, the organization that provides electricity to the Valley. He had the tariff plans for domestic consumers in Kashmir – confirming that electricity supply was never free for residents. According to the tariff table for home use in Jammu and Kashmir, the first 100 units cost Rs 1.69 RS per unit. The price reaches RS 3.52 for each unit after 400.

A May 9 report by The Tribune said power distributors have come up with higher electricity tariffs to cover their losses, which amount to nearly 4,000 crores. 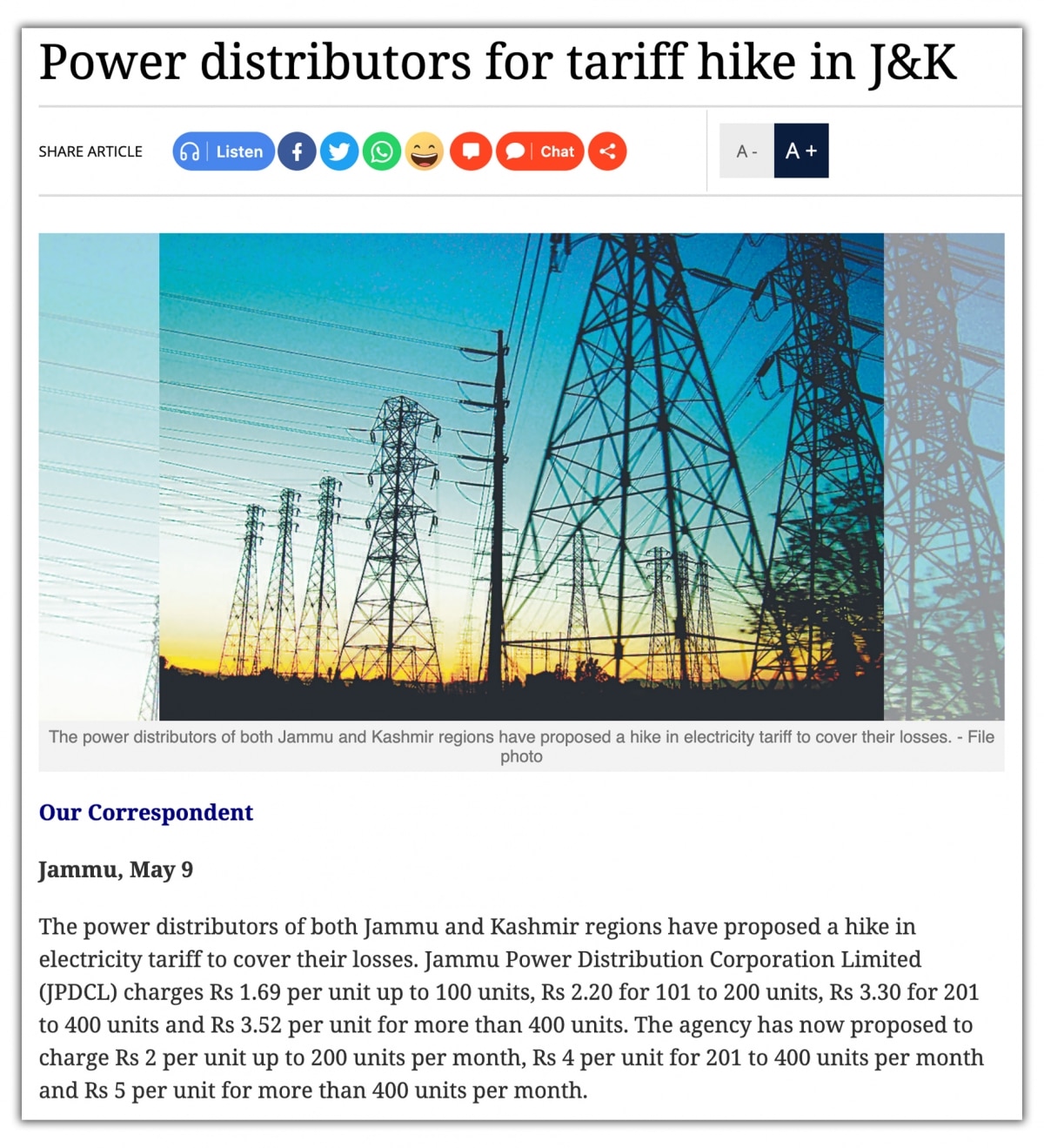 According to a report by Great Cashmere on September 11, 2021, Jammu and Kashmir spent Rs 6200 Cr per year on power purchases while its revenue realization is only Rs 2600 Cr due to tariffs collected from consumers.

So how did this rumor spread?

Another search for the viral claim led us to several the news which quoted J&K Lieutenant Governor Manoj Sinha as saying that electricity will not be given to people without paying for it and those who do not pay will not have electricity.

While reporting this, many websites carried a headline that read, “Pay money to get electricity, no more free electricity now: LG Sinha”, creating confusion as to whether electricity was free in Kashmir. 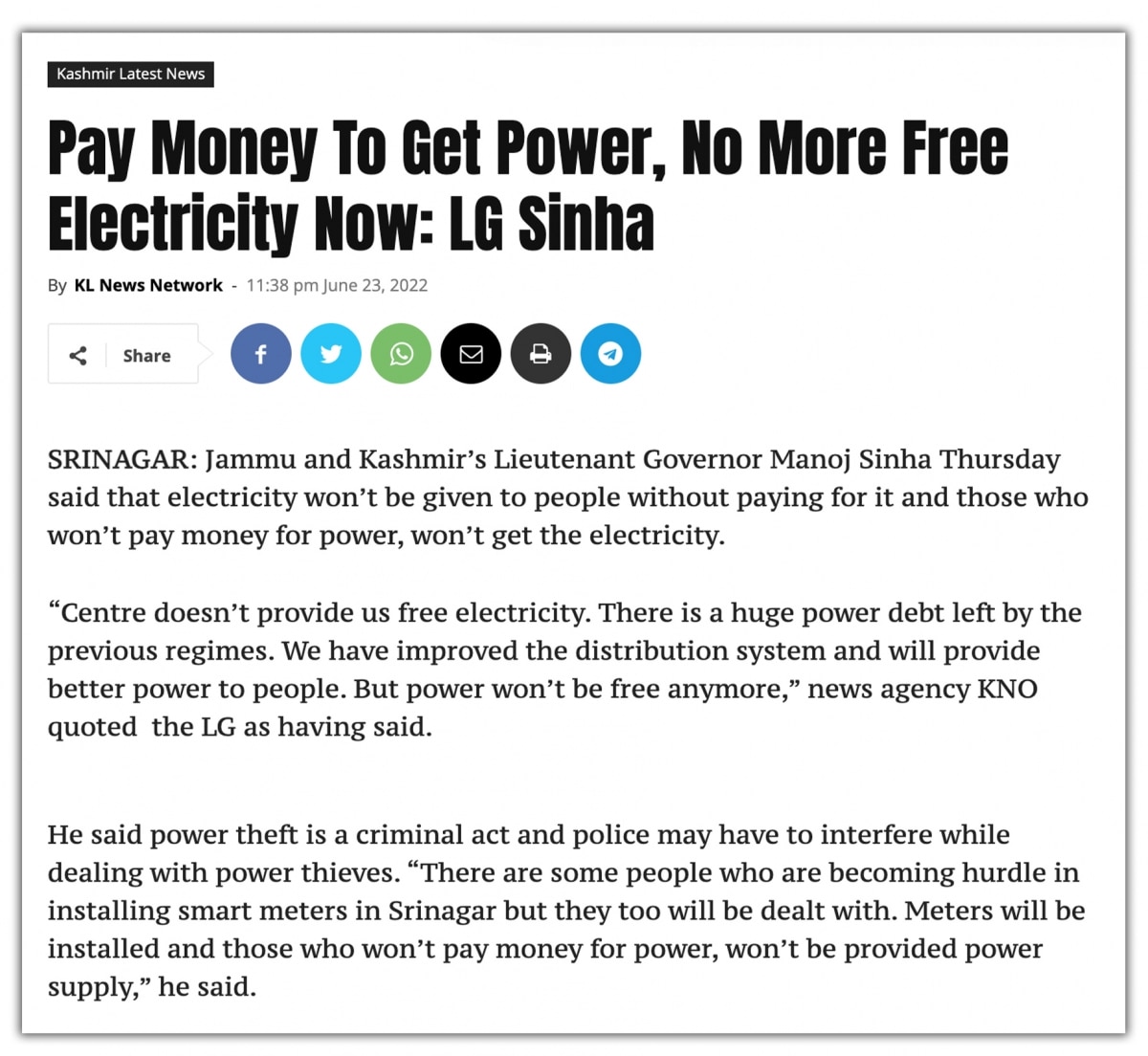 Why is the board in trouble?

Surinder Sagar, a Kashmir Times reporter, said, “Electricity is never free in Kashmir. But there is a part of the population in the valley who do not pay their bills despite using the service. But things changed after Jammu and Kashmir became the union. The Lieutenant-Governor has just clarified this. It looks like the power supply will no longer be available for those who don’t want to pay their bills.

While researching the reason for such a gigantic loss, we came across a 2015 report of Excelsior of the day, a Kashmiri daily. The article mentioned the income imbalance between Kashmir and Jammu. Despite equal energy consumption, many Kashmiris have a history of not paying their electricity bills.

A detailed report of the State Electricity Regulatory Commission of Jammu and Kashmir as of 2016-17 predicted a revenue gap of over 2000 crore for the financial year 2020-21. Therefore, it is clear that the viral post that claims Kashmiris were getting free electricity since independence is not true. To claimKashmiri residents have been receiving free electricity since India’s independence – a situation that has recently changed.ConclusionElectricity has always paid off in Kashmir. However, the theft of electricity is commonplace there. Recently, Lieutenant Governor Manoj Sinha declared a firm policy against this.

The number of crows determines the intensity of the lie.